skip to main | skip to sidebar

...a...healthy baby! Hooray! Really that is what is important, right? All the baby's measurements came back perfect as well as blood tests and so forth. We are thrilled to know this little one is doing so well swimming around in mommy;s tummy.
But, really, I know what you are all waiting for...boy or girl? Right? Okay, well here is a little background on how we found out what we are having both with Ethan and now with this new baby. First, we go to the doctor's office for our ultrasound. We politely inform the ultrasound tech that we would like to know what we are having but do not want her to tell us but rather right it down on a piece of paper and seal it in the envelope we have provided. Then, we go to the mall and browse all the cute little newborn outfits and try to find a store with both a boy outfit and a girl outfit we like. Once we have found "the" outfits we proceed to the register where we ask the clerk a little favor. We leave them with the two outfits, the envelope, and enough cash to cover the cost of one outfit. We ask them to wrap up the outfit that corresponds with what is written in the envelope and leave our receipt and change in the envelope. We then leave and return a few minutes later to pick up our little package. Lastly, we head out to dinner and proceed to open our little gift for the new baby at dinner together. How's that for fun! So, without further ado here is the video of me opening the box last night (cause Andy got to open the box when we found out Ethan would be a boy)...
NOTE: Sorry there is so much background noise and that the picture is so yellow...this video was taken with our little snap and shoot digital camera.
If you couldn't hear everything that was said then here it is loud and clear:
It's a GIRL!!!!
Was I in shock? Yes, very much so! The reason being that while at our ultrasound I was CONVINCED I saw little boy parts. I guess I was just seeing the umbilical cord. When I opened the box I almost cried...I was totally giddy!!! So, here is the outfit we picked out for our sweet little girl. We went for something cozy and cuddly this time (with Ethan we had picked out something a little dressier but he only ended up wearing it once or twice). We actually had quite a hard time agreeing on clothes this time. There were a couple other stores we found that we either really liked a girl outfit or we really like a boy outfit but not both so we ended up at Old Navy. 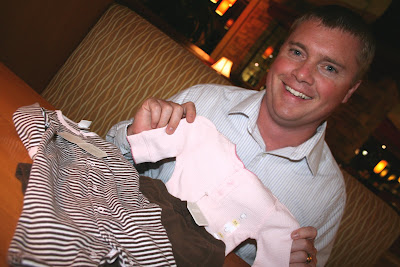 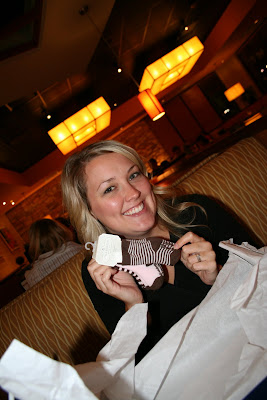 Our experience at Old Navy was fun. The clerk was super excited when we told her our plan. And when we opened the envelope at dinner there was a $10 gift card and a note that said, "Congratulations from Old Navy!" So sweet! 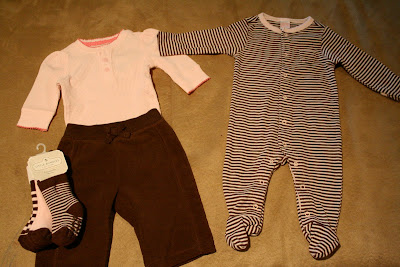 More of the story...
The ultrasound tech totally had me fooled...she told us she calls all baby's a "he" and then we talked and talked about her two boys and how crazy it is to have two boys. She had us look away while she got a closer look and printed out the following picture which she included in the envelope along with a note that said, "Get ready Daddy. It's a Girl!" On the ultrasound picture we included an arrow pointing to what she labeled as her "Princess Parts." Hilarious! 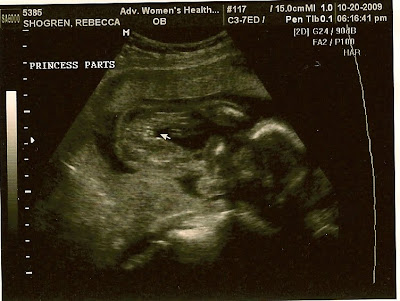 Yesterday, before our appointment Ethan and I were sitting at the table doing some coloring and practicing his counting. I asked him whether he wanted a brother or a sister and caught his response on video. Here it is:
Then this morning I gave Ethan his new baby doll in order to begin to introduce him to the whole baby concept. He LOVED IT! It is a bath time baby and comes with a little yellow towel, slippers, soap bottle, and fish toy. I think he was particularly fond of it because it has a yellow towel. Ethan also has a hoodie yellow towel just like his baby. He immediately ran to get his own yellow towel and wanted to be wrapped up like his baby. 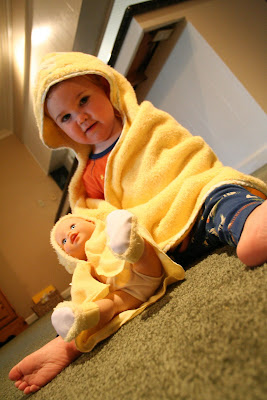 Then he proceeded to give his new baby a bath. So cute! 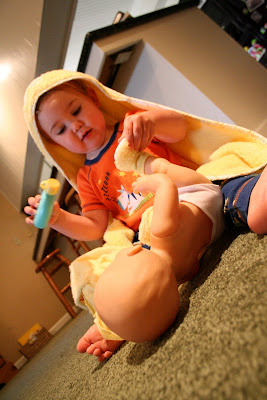 It wasn't long before he was trying to poke baby's eyes out and throw baby onto the floor. He returned to his trucks and trains soon after. Boys will be boys! But his world will be rocked soon with a little GIRL!!!!
Here is her profile picture! I think her profile looks a lot like Ethan's. 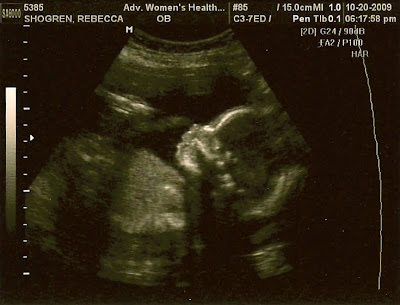 YEAH YEAH YEAH. I LOVED watching your video, omigosh so cute. YEAH FOR GIRLS. DAvi and I are already plotting lots of girly things! =)

this is such a fun way to find out! Kelly

Becca
I am a wife to one great guy and mother to one active little boy and one sweet baby girl! I have the joy, pleasure, and privilege of staying home with our kiddos, and I love every minute of it! I LOVE to create...whether it be with paper or fabric, play-doh or crayons...it brings me joy to create beautiful things for my home, my family, my friends, and for those in need. This blog is a place for me to share my creations with you...enjoy!

Look For Me Here!